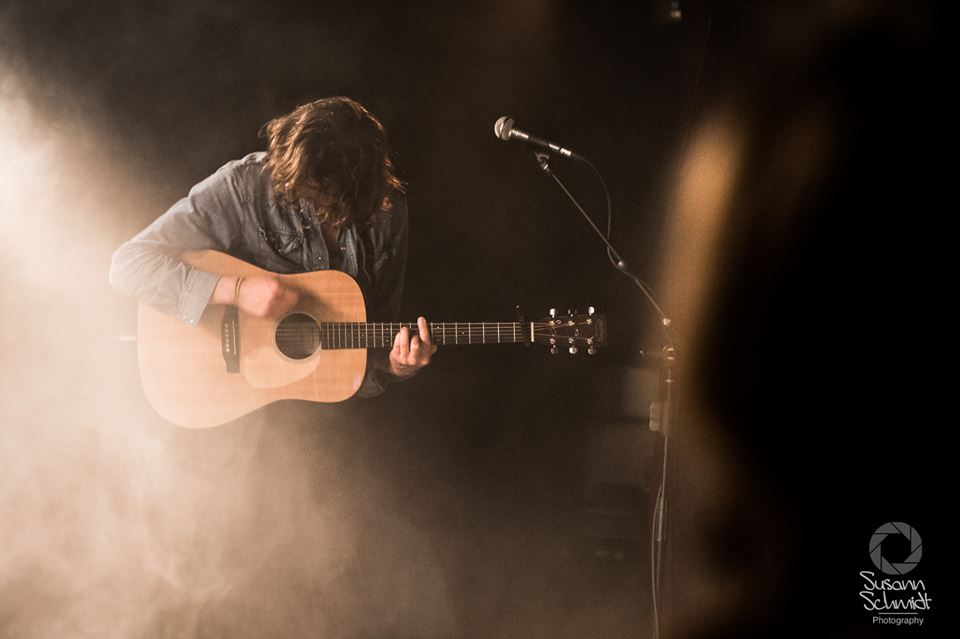 ON THE 23th APRIL 2017 , A SUNDAY EVENING OR RATHER A SUNDAY NIGHT, WE SAW A MAN BEHIND SHADOWS AND A GIRL WITH A STRONG VOICE: FIL BO RIVA WITH LISA MITCHELL AT THE GROOVESTATION

For the newcomers in the city of Dresden or for those who are not very active once the sun goes down, Fil Bo Riva’s concert was the perfect opportunity to discover the famous GrooveStation. From an almost empty bar around 8 o’clock – understandable as the days are getting longer and people less inclined to show up on time – it turned into a jam-packed, colourful nightclub by the time the singer appeared on stage. And he eventually appeared. In the meantime the growing audience could enjoy the soft but confident voice of Lisa Mitchell, the sadness, happiness and honesty of her songs, which allowed us to enter the privacy of her world. Alone on stage, guitar in the hands, she sang a few of her love stories, a mix of folk and indie pop, and a slight British touch. The lyrics are often very simple, sometimes even resembling lullabies, but the charm of her voice and the sincerity of her words appealed to us. The soothing and flowing atmosphere lingered on for a while after Mitchell left the stage, a good time to get one more drink and chat a little. Too bad it took so long for Fil Bo Riva’s concert to start. Full glasses in the hands, cigarettes smoked, the audience was starting to lose patience. It did not stop the crowd to get bigger and bigger and at some point I even wondered if the walls just moved and the room expended as it looked so different from the empty bar I entered less than two hours before.

And he appeared. Without even seeing him on stage, one understood that something was happening. Voices of obvious fans were getting louder, people started to wriggle, fog and smoke filled up the room and bright colours finally lit up the singer. With a laid-back attitude and a deep, raspy voice he immediately seduced his audience which started to dance and follow the beats of the drum and the sensuality of his voice. The 24-year-old ventured a few unintelligible jokes which only the fans facing him appeared to understand. He kept the excitement on the edge with abrupt song endings, mixing beats and dynamics with softer and melancholic rhythms.

The jam-packed room did not allow much dancing so for those who wanted to relieve themselves of the week’s stress and unleash their passions on the dance floor, the concert was a perfect way to start the night and get ready to dive into the next clubbing atmosphere.

Groove station: Good for chilling and having a drink at the bar, as well as for smaller „one person on the stage“ concerts or sweaty audience and band connections but too small for Fil Bo Riva, I guess it would have been better for his poetic performance to have a little distance with the audience.

Fil Bo Riva: A talented young guy from Rome, Dublin and now Berlin. My expectations were not met, live not so „blow me away“ like in stereo, a little bit disappointing in that way.

Lisa Mitchell: A girl from Down Under, nice voice and honest lyrics, once a participant of the show Australian Idol (by the way), I want to see her again!